What I Learned in January

Several of my favorite bloggers post regularly - monthly or quarterly - about what they have learned.  I thought, at the beginning of this year, "What a good idea.  Let me write about my learning, too!"

In church we have been studying the book of Leviticus, and discussing the sacrificial system in the Old Testament.  I admit I was not initially thrilled by this choice, but I have been learning every week from the conversations around our Table.

For some reason, I put the word mordicus on my list; this is a French adverb meaning "with an opinionated firmness."  I'm sure I learned other words this month, but that is the only one I carefully wrote down under the heading "What I Learned in January."

I learned about Oprah Winfrey and her TV career this month by listening to the interesting podcast series "Making Oprah."

I learned that in this season of my life, it works better for me to exercise first thing in the morning, right after I wake up.  I had been working out right after getting home in the afternoon, but that hasn't been happening for a while (I'm embarrassed to say how long).  This month my workout calendar filled up, and there are many more days I did exercise than days I didn't.  I will never be an athlete, but this is progress.  I feel so much better when I'm exercising regularly; I know this, and yet I fall off my routine again and again.  This new routine has worked well in another way, too; I have been listening to uplifting podcasts instead of what I was doing before, which involved a fair amount of brooding over the world and its current condition, and all the things I can find to be sad about.

I learned what the President of the United States allegedly thinks of this country, Haiti, where I have lived for more than twenty years, where my children were born.  Worse, I learned that many Americans agree with the words, whether he actually said them or not. 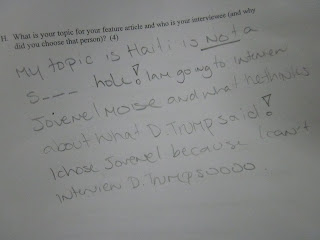 After that my list ends.  That's not because I didn't learn anything else, but because I did, and because I started to get discouraged that I need to keep learning the same lessons again and again.  In January, I learned how clumsy I can be about people and relationships.  I learned that emotionally I am a little too much like my thirteen and fourteen year old students and not enough like the staid, sensible middle-aged woman with everything figured out that I am supposed to be.  I learned that people leave, and it hurts.  It just hurts to love people, period.

I already knew all these things.

Other people post helpful advice, apps that will organize your life, wise thoughts.  Maybe in February I can learn some of that.  We'll see.

Love your blog! Congratulations for keeping it going and for sharing with so many people. I learn lots from you!

I enjoyed reading your list! (Though I'm totally crushed that you don't have everything all figured out.)

I'm with you on "reviewing" the same things over and over... Sometimes I crack open an old journal and see that the discovery I'm supposedly making is actually old ground.