This poem wasn't open in a tab, so it's sort of cheating on my project, but since I made up the rules myself I guess I can break them. I took some photos this week of cleaning supplies on our campus, and that made me think of this Pablo Neruda poem I had saved on my hard drive. I don't know if the Chilean brooms he was thinking of are similar to our Haitian ones, but I love - and relate to - the way he expresses how he feels useless because he doesn't work with his hands. 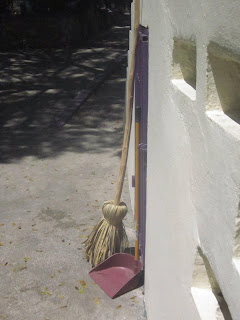 
I declare myself guilty of not having
made, with these hands they gave me,
a broom.

Why did I make no broom?

Why did they give me hands?

What use have they been
if all I ever did was
watch the stir of the grain,
listen up for the wind
and did not gather straws
still green in the earth
for a broom,
not set the soft stalks to dry
and bind them
in a gold bundle,
and did not lash a wooden stick
to the yellow skirt
till I had a broom for the paths?

So it went.
How did my life
get by
without seeing, and learning,
and gathering and binding
the basic things?

It's too late to deny
I had the time,
the time,
yet the hands were lacking,
so how could I aim
for greatness
if I was never able
to make
a broom,
not one,
not even one?


Today's Progressive Poem line is here. Mine is tomorrow!
Posted by Ruth at 1:00 AM

It is something to ponder, we who believe we are so capable who cannot, or did not ever "and did not lash a wooden stick
to the yellow skirt". Thanks, Ruth.

What a fantastic project, Ruth--or rather UnProject, a bit like mine. I'm sorry I'm just realizing there's something to follow along with here, but I came on the absolute right day: Neruda! Writer's guilt! Respect of "gathering and binding the basic things".
Your taste is--well, like mine. : )

I so love this. And love that we have read some of the same books this year too! I adored JOYFUL and am still thinking about it. xx

I love this poem! We just finished reading The Dreamer, about Pable Neruda and are enjoying learning some of his poems. I will share this with the kids.